Back to Blog Posts
Prev Next

Don’t Worry: We Aren’t in a Housing Bubble

Why there’s no reason to worry about a housing bubble in 2022.

Are we heading into another housing crash like in 2007? Every month, there are thousands of Google searches for terms relating to “housing bubble”. It’s clearly on people’s minds. This market may feel similar to the one back in 2007 due to all the high prices, but is it?

For the market to be in a bubble, investment needs to be driving demand way beyond where it should be. So are we in a real estate bubble? I don’t believe we are.

Real estate bubbles are very rare. The 2007 housing crisis happened due to a series of events and decisions that would not occur today, such as the relaxation of lending standards, which have become much stricter in the years since. Adjustable-rate mortgages were popular at the time and much less regulated than they are now. Those mortgages enticed buyers with low introductory interest rates that skyrocketed once homeowners were locked into paying them.

Another reason for the 2007 real estate collapse was that many people had almost no equity in their homes. The riskiest mortgages at the time required nearly no proof that buyers could truly afford them. Once the market fell, all kinds of people found out that their loans were worth more than the houses themselves. This meant they couldn’t sell without going into debt. Today, homeowner equity is at an all-time high.

After the crisis, multiple banks were fined millions and sometimes billions of dollars for their participation in lending fraud, so they’re not eager to repeat that. Also, according to data from the Urban Institute, the median FICO score for current purchase loans is about 42 points higher than before the 2007 housing crisis.

Most experts unanimously agree that interest rates will continue climbing this year, which will deter overly-speculative investing as borrowing money becomes more expensive.

Additionally, since the crash, new home construction has lagged quite a bit. According to the National Association of Home Builders, the U.S. went from averaging between 9 million and 11 million housing starts per decade from the 1960s to the 2000s, to just under 7 million homes during the 2010s. Also, as properties became more expensive to build, home builders were encouraged to build more luxury homes than starter homes. Due to all that, it’s likely to take years before supply and demand balance out again.

Home prices aren’t likely to decrease significantly anytime soon, and demand is expected to remain high. Concurrently, the latest data from Zillow shows that the number of houses for sale in the U.S. dipped below one million in December. A year earlier, there were an additional 220,000+ properties for sale across the country.

Today plenty of buyers are paying with cash or are extremely qualified for their home loans. The state of our market is much more stable, so there’s no need to worry about another market bubble.

So when can we expect home prices to decline? My best guess is that they won’t drop for another five years. None of the factors that can change the market will happen overnight. If you’re waiting for prices to dip, you may be waiting a very long time.

If you plan to buy a home, don’t delay meeting with us to discuss your options. Just call or email us—we look forward to hearing from you. 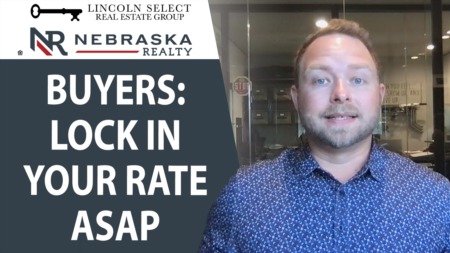 Rising Rates While You’re Under Contract

You have options to safeguard yourself from fluctuating rates. What happens if interest rates increase after you’ve ...